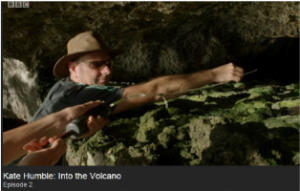 Aired on BBC2 on Sunday 11th Jan, Kate Humble and a team of scientists took us Into the Volcano. An investigation to discover if another eruption might be imminent at one of the most active lava lakes in the world.

The risky investigation included abseiling into the volcano to collect rock and gas samples whilst also conducting gas analysis at various points on the island to provide an indication into how the volcano is changing.

A couple of months earlier, the BBC had contacted a1-cbiss to order Gastec detector tubes. We were told that they were being used in a volcanic investigation being broadcast on BBC2. When the programme was shown, we were fascinated to see how important a role the Gastec tube system played.

Kate joined a team of scientists on an inspiring adventure to one of the most active volcanoes in the world.

Maram is situated on an island called Ambrym. It is one of the islands in the Vanuatu chain  on the edge of the Pacific Ocean’s ring of fire.

Volcano Maram is just one of five active volcanoes on the planet and pumps out more Sulphur Dioxide (SO2) than anywhere else in the world engulfing the island and its people.

A team of scientists have been monitoring the volcano since its last major eruption need to understand how the volcano works. Whilst material from the lava lake may not always be thrown in the air, Maram is always erupting, alive and pulsing. The team are looking for indicators for a mood shift.

To identify a more violent, eruptive stage than simply being a lava lake – the best example of that was in 2005. During the last major eruption, Maram was the biggest point source of Sulphur Dioxide (SO2) on the planet! The level of gas shows coming out shows how active the volcano has become.

For the lives of the islanders, there is a constant risk of eruption. Kate wants to know more about island stories and their link to the volcano. Ambrym is the most notorious for black magic. Complex systems of belief are deeply connected to the volcano.

Kate and scientist Shane visit Chief Harry where he tells them a story about a mysterious cave on the coast and its power to kill. Since the early 19th century, anything that went inside, died. If you were to take someone’s leftover food, that person would die! Chief Harry talks of shortness of breath which Shane links to carbon dioxide (CO2).

Shane is convinced that the cave is a volcanic vent. A deep crack in the earth which is releasing potentially deadly amounts of CO2 and could provide clues into Maram’s behaviour. Once at the cave, the Gastec gas detection sampling system is used to sample CO2.

The system consists of the Gastec pump, Gastec gas tubes and sampling tubing. The geologist uses the Gastec pump to draw CO2 up through the tubing. Then over the Gastec tube to provide a visual indication of the level of present gas. Sample tubing is used to advantageously reach inside the cave.

Shane claims are the readings are more than 10 times above ‘normal levels’! The team declare that these gas concentrations could potentially have serious consequences (as they saw with dead wildlife in the cave). So the team quickly move away to be safe.

Shane reveals that whilst they wouldn’t need to monitor constantly. However, he does suggest that this would be a place of interest for frequent monitoring. If a big spike was revealed in carbon dioxide here, then this would be the indicator to provide a warning for the people of Ambrym. An increasing rise in carbon dioxide could suggest that magma is rising from deep below meaning the risk of eruption is more likely.

Or if you require any further information on Gastec Detector Tubes, click here