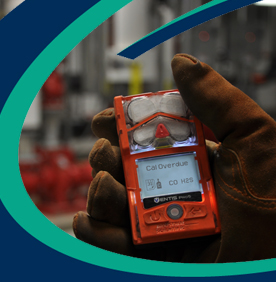 Ventis Pro Series monitors are among the smallest gas detecting instruments in the class of four and five gas wearable gas monitors, yet the Ventis™ Pro Series Multi-Gas Monitors have been designed with several enhanced alarm and alert capabilities.

Beyond the Low, High, STEL, and TWA selectable alarm levels found on most portable gas monitors, a fifth alert level has been implemented in the Ventis Pro Series that acts as an early warning below the low alarm set point. When the gas concentration exceeds the Acknowledgeable Gas Alert set point, the instrument will activate the alarm indicators to alert the user that he may be approaching a dangerous condition.

The user may need to take preliminary or mitigating action, but can acknowledge and silence the alert while he continues his work. If the condition persists beyond 30 minutes, the alert is reactivated.

The Ventis™ Pro4 and Ventis™ Pro5 include the standard audible, visual, and vibrating alarms. The audible alarm is capable of delivering a 95dB tone at a distance of 10 centimeters.

The flashing action of the four ultra-bright LEDs, two red and two blue, will attract the attention of the user and others around while the vibrating alarm provides a sensory alert to the user in the highest noise environments.

The Ventis Pro4 and Ventis Pro5 are designed with full screen alarms that maximise the reading from any alarming gas sensor, taking advantage of the maximum display area available and eliminating the confusion that can be created when four or five gas readings are displayed simultaneously.

The Ventis Pro Series instruments have alarm capabilities beyond the normal gas alarms.

A dedicated panic button and man-down alarm alert nearby workers when someone is in distress or has lost consciousness. Each instrument is equipped with a large red button in the centre of the sensor area that activates.

If a worker finds himself in a situation where he needs assistance or medical attention, pressing the panic button activates the audible and visual alarms letting others in the area know that he needs help.

A built-in accelerometer provides man-down functionality in the Ventis Pro4 and Ventis Pro5. If the man-down function is enabled, and a worker fails to move within a preset period of time, an alert is triggered on the instrument. If the alert is not acknowledged by the user, the full audible and visual alarms are activated letting anyone in the area know that the user has encountered trouble and is incapable of helping himself. 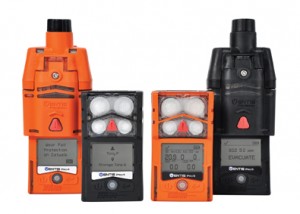 The Ventis Pro has a number of enhanced features such as iAssign, Enhanced Alarm Capabilities and Flexible Sensor Configurations. Learn more about the Ventis Pro