Discover how an a1-cbiss site survey revealed the inadequate use of pellistor sensors at a waste facility following the issues with their hydrocarbon gas readings.

At the incinerator, there are four burners. The incinerator burns general household waste that can’t be recycled plus whatever people throw away, even the things they’re not supposed to (they’ve had paint and aerosols that have exploded).  As a result of burning residual waste, dusty ash escapes into the atmosphere inside the plant. These dusts can contain plastics, silicones and a number of other possible inhibitors that could be detrimental to the life of a gas detector.

The Problem with Pellistor Sensors

There are 2 detectors on each of the 4 burners that are used to measure hydrocarbons.

Hydrocarbons are installed to measure 0-100% LEL and the risk of explosion within the facility.

When the EfW site was constructed, pellistor sensors were installed to measure hydrocarbons. A pellistor sensor is commonly used to detect combustible gases within the explosive range to warn of rising gas levels.

Once operational, the site recognised that there was a problem with the gas detectors because of low readings during a gas test.  The readings were much lower than expected based on previous testing. The operations team made the decision to replace the pellistors with new sensors as a means of fixing the problem. However, after just 3 weeks the new sensors were only reading 13%LEL when using %50LEL gas – a drop of almost 75% in readings from what it should be.

The site realised they were faced with the same problem.

So the site turned to a1-cbiss who were invited to conduct a site survey and identify what was going wrong on site.

The site survey concluded and a1-cbiss believed that the issue was with the pellistor sensor technology, given the potential for silicone particles, fine dust and other potential inhibitors in the site’s atmosphere”.

The problem with pellistor technology is that they’re prone to poisoning from silicones commonly found in household items. Items such as lotions and hair products, or industrial lubricants or silicone-based sealants. They can also be affected by inhibitors from halogenated compounds as well as products containing astatine, bromine, fluorine, chlorine, and iodine.

If partially coated, the sensor response is reduced significantly, however if it is fully coated the pellistor sensor can no longer burn, and as such cannot detect any combustible gas. Inhibitors on the other hand can desensitise the sensor and shorten its life.

Because of the limitations of the technology, the only way of testing that the detectors are functioning correctly is to gas test with a known quantity of gas on a regular basis, which isn’t always feasible with fixed detection.

a1-cbiss were confident that the problem would be solved by replacing the pellistor sensors with IR sensors. IR sensors can’t be poisoned and provide a fast response. The biggest advantage is that IR technology provides fail-safe testing. This means that if the infrared beam was to fail, the user would be notified of this fault on the detection control panel. 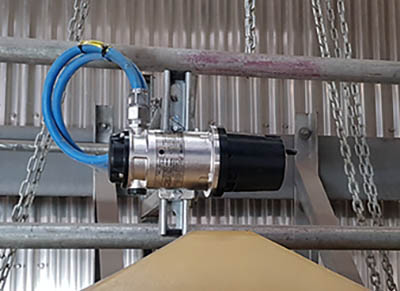 The GD10 Series from Oldham differ from all other models because they utilise a silicone-based solid-state infrared source. They have been designed to provide an effective response to gas hazards in a wide range of harsh industrial environments.

The complete optomechanical design and construction is so stable that an ultra-fast speed of response can be achieved. The GD10 IR sensors provide unparalleled service life and detector stability, thus saving on maintenance and service costs. This is backed up with the longest combined detector and IR source warranty on the market.

The Oldham MX43 fixed gas detection control panel is an analogue and digital gas control system. It provides continuous measurement and control of toxic and combustible gases present. The MX43 digital technology allows up to 32 gas detectors to be distributed on 8 lines using a 4-20 mA or digital contact signal.

The EfW already had the MX43 installed, and as they were using 3 wire devices, a1-cbiss were able to swap out the GD10 sensors without having to rewire the system. As such it was relatively non-intrusive to site, and we were able to get the entire swap out done in a day and a half.

“We were extremely satisfied with the professional manner in which the project has been carried out and effectively resolving our onsite issues. Thanks again.”